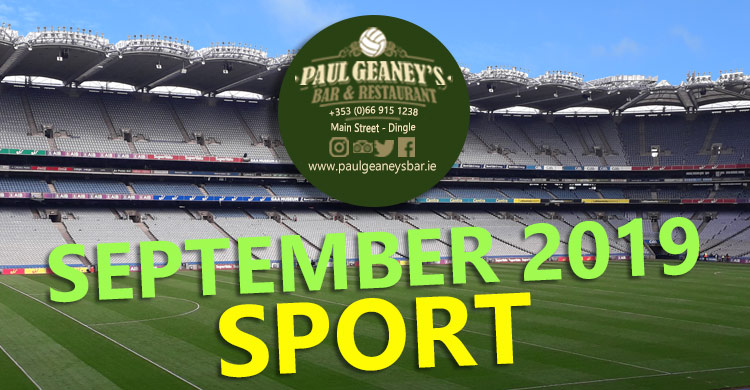 Some nutrition tips for our many visitors who will take part in this year's Dingle Marathon from Sports Nutritionist Kevin Beasley of metabolise.ie

Good luck to everyone!

All roads lead to Croker (again!).... What a thriller at the start of the month! Back to headquarters though on September 14th to do it all again....

One piece of silverware each for Liverpool & Man City in the UEFA Super Cupand the Community Shield respectively....

Liverpool looking good and off to a flyer! What are the chances of going one place better than last season..... Along with Man City & Leicester City, they remain unbeatten, but unlike their chasers, they have yet to drop a point!

Newly-promoted Aston Villa and Norwich City are struggling with the pace of top flight football already. However, Sheffield United and Kerry Legend John Egan’s son, John, are holding their own mid-table.

All Kerry eyes will be on their clash with Liverpool on the 28th September.

One final warm up game for Ireland against Wales before they head for Japan. The tournament gets underway on Friday 27th September with the hosts Japan taking on Russia. Ireland's first game on Sunday 22nd September is against Scotland.

Predictions? New Zealand's to lose, France dark horses and a semi-final spot for Ireland..... What do you think?

Because of the time difference, the games will have already started before we open, but we'll have all the LIVE action from 12pm....

Call in for a drink, a bite to eat and another cracking month of sport!

On our screens from 12pm

Push yourself again and again. Don’t give an inch until the final buzzer sounds. - Larry Bird